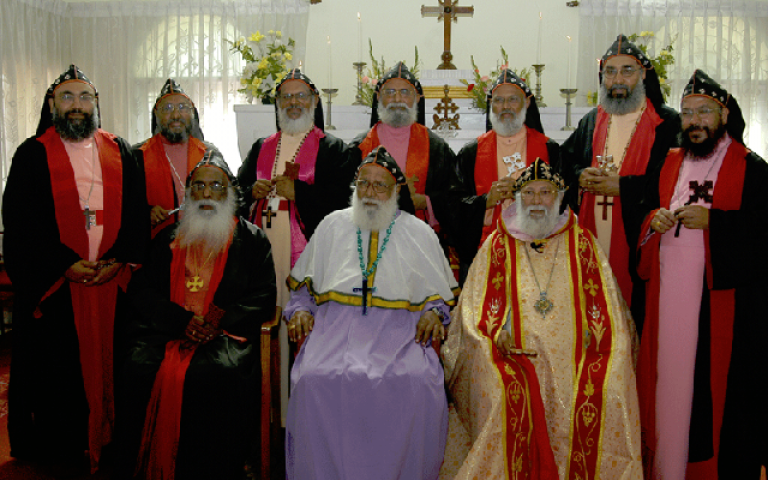 His Grace the Malankara Metropolitan by a Kalpana seeks nomination from Church members of potential candidates for the office of bishop. An achen nominated to be a bishop should be celibate, 40 years of age and should have 15 years’ service in the ministry.

All nominations so received and any other person nominated by the Metropolitan himself are reviewed and recommended by the Episcopal Nomination Board instituted by the Mandalam.

The nominations proposed by the Board are voted by the Mandalam. A nominee who received 75% of the votes of clergy and laity respectively in the Mandalam will alone stand elected to the Episcopate.

The elected candidate is consecrated as Ramban (monk) during the Holy Qurbana Service. The consecration involves the following: The candidate takes a vow for celibacy and is given a black cassock, a wooden cross, a black gown with blue border, a Masanapsa (head covering having embroidery of ‘one big cross ans 12 small cross’).  Hair from the candidates’s head is cut in the form of a cross (symbol of entry into the divine order). The feet of the candidate is washed by the Chief Celebrant (symbol of entry into new life) and a set of sandals is given (symbol of victory over evil).

The consecration of a Rambanachen as a Bishop is held during the course of the Holy Qurbana. The new Bishop seated on a chair is lifted thrice amidst loud chants of ‘Oxios’, a Greek word meaning ‘he is worthy’. The new Bishop is handed over the Pastoral Staff, marking the culmination of the installation ceremony. The new Bishop is also renamed on the occasion. The  new name is given by His Grace the Metropolitan.