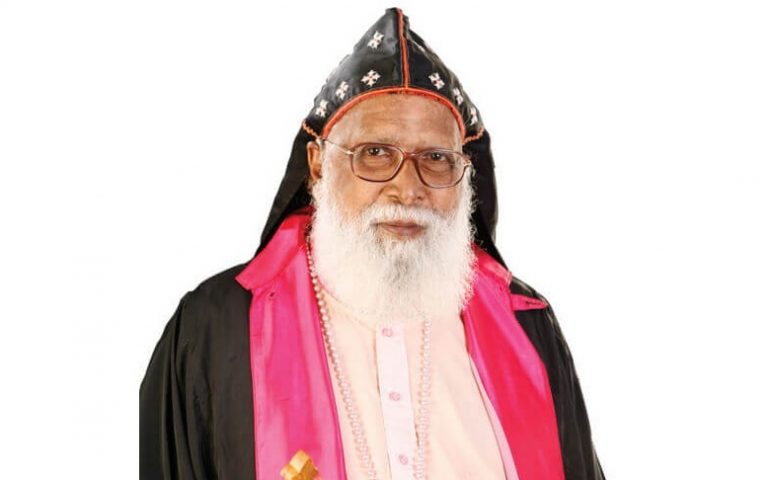 Padmabhushan Dr. Philipose Mar Chrysostom Mar Thoma Valiya Metropolitan was born as the son of Very Rev K. E. Oommen and Mrs Sosamma on April 27, 1918 in the kingdom of Travancore. Thirumeni was called to eternity on May 5, 2021 after completing 103 blessed years in his grace’s life.

Thirumeni was born and brought up in the Adangappurathu Kalamannil family, a family of great priestly tradition. He had his upbringing in different places in central Travancore like Maramon, Kozhencherry and Eraviperoor. He was named Dharmishtan by his beloved parents and throughout his grace’s life thirumeni strived to fulfil the desire of his parents to see their son as a champion of justice in all arenas of his grace’s involvement.

After graduating from the UC College in Alwaye, thirumeni went to live as a missionary in Ankola in Karnataka for two years. Thirumeni did his theological studies in Bangalore United Theological College and got ordained as a deacon on January 1, 1944.

He had his higher studies in theology from the St Augustine College in Canterbury. He was consecrated as an episcopa of the church on May 23, 1953 along with the bishops of beatific memory Most Rev Alexander Mar Thoma Valiya Metropolitan and Rt Rev Thomas Mar Athanasius.

He served as the missionary bishop of the church for many years, helping the mission fields and parishes outside Kerala to develop well under his grace’s guidance. Thirumeni served as the Principal of the Mar Thoma Theological Seminary and contributed substantially towards the development of the overall ministries of the seminary.

Thirumeni voluntarily retired from the responsibilities of the metropolitan after 8 years’ service on October 1, 2007. Thirumeni was a true philanthropist; helped the poor and marginalized sections of people in and around the places of thirumeni’s ministry to equip them to overcome their limitations in life to develop themselves as independent and successful individuals. He campaigned vigorously to construct houses for the houseless. Thirumeni celebrated his Navathy by constructing 1500 homes for houseless people all across Kerala.

Thirumeni was a real champion of eco justice and social equality. Thirumeni’s collaboration with the co-activists to protect the Pampa river was a mark of his love for the nature. In his capacity as the metropolitan emeritus of the church Thirumeni spent most of his time building bridges to other churches and faith communities to bring everyone into an idea of wider ecumenism, the one household of God.

Thirumeni will ever be remembered as a great thinker. He had a great skill to communicate lofty theological ideals in the simplest communicable forms and language. People across all religious and political divisions enjoyed his mentoring, companionship and acute sense of humor.

Thirumeni was a great ecumenist who drew respect from all across the different ecclesiastical and religious traditions. He was the only living bishop who attended both the Amsterdam WCC Assembly and the Vatican II council, the watershed moments in the ecumenical history of both the protestant and Catholic factions of the Christian Movement.

He was the longest serving bishop in any Indian Church as his grace completed blessed 68 years of episcopacy. On the eve of Republic day in 2018, considering the incredible services to the society, the nation recognized thirumeni by awarding Padma Bhushan, one of the highest civilian decorations of our country. His legacy will continue to remain for many generations and inspire many lives.

Praising God Almighty, the author and perfecter of life for thirumeni’s life and witness.